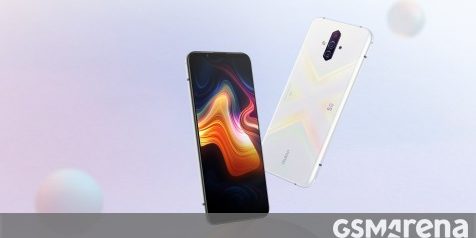 After a number of gaming flagships, nubia launched the midranger nubia Play. Initially released in China, the phone is likely to appear outside the domestic market but under a new name name.

The Nubia NX651J phone, which is the model designation of the nubia Play, was certified at the GCF (Global Certification Forum) and EEC (Eurasian Economic Commission) with the name Nubia Red Magic 5G Lite.

The phone brings plenty of exciting specs, including a 144Hz refresh rate of the AMOLED screen and 240Hz touch sampling rate. It brings a clean design on the front with no cutouts or notches – the selfie camera is hidden in a full bezel on the top. Its gaming nature is also evident from the two capacitive shoulder buttons.

However, this phone is aimed at mobile gamers on a budget, so the nubia Play doesnt have the mightiest specs on the market like top-tier chipset or memory – there is a Snapdragon 765G SoC, coupled with up to 8GB RAM. At least there is a massive 5,100 mAh battery that comes with 30W fast charging.

OnePlus to launch Nord AR invites tomorrow for INR 99 ($1), will let you have an early look at the phone
July 10, 2020
OnePlus Buds teased to launch alongside Nord series
July 10, 2020
Motorola relaunches the Moto G8 Plus as One Vision Plus in MEA
July 10, 2020

Huawei Enjoy 20 render shows round camera setup and pop-up selfie camera
July 10, 2020
DON’T MISS OUT!
Subscribe To Newsletter
Our iOS app will be ready soon, be the first to know
Give it a try, you can unsubscribe anytime.