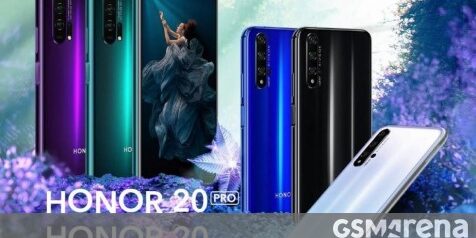 European owners of the Honor 20 and Honor 20 Pro will be very happy to know that a brand-spanking new software update is now on the way to them. It’s already caught rolling out in France, Germany, and the Czech Republic, and it will probably spread to other countries soon.

It brings Magic UI 3.1, which is the latest interpretation of Honor’s Android skin. It’s based on Huawei’s EMUI 10.1, which itself stands atop Android 10. The first rollout of Magic UI 3.1 happened for the Honor 20 and Honor 20 Pro back in May, but only in China. It’s nice to see it finally visiting other parts of the world.

You can get the update through the Support app. The new build is 10.1.0.230 (even the build number is very EMUI-sounding). As usual, the rollout is going out in batches, so it may be a while before it’s available to everyone.

iQOO 5 appears on Geekbench as Pro version poses for the camera
August 14, 2020

The next foldable Moto Razr will be announced on September 9
August 13, 2020
DON’T MISS OUT!
Subscribe To Newsletter
Our iOS app will be ready soon, be the first to know
Give it a try, you can unsubscribe anytime.