Schell Games Offers Stability in an Industry Plagued By Layoffs 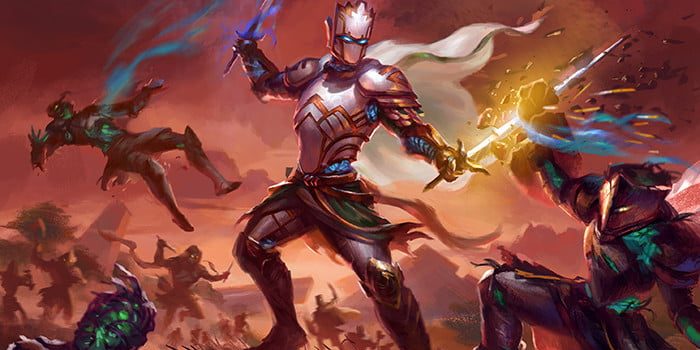 The video game industry finds itself at a crossroads. Sales are soaring through the roof both for traditional games like Red Dead Redemption 2, which has sold more than 23 million copies. Microtransaction-based free games like Fortnite are also massively popular, with Epic’s game sitting at about 250 million players.

Despite this, major publishers and studios are laying off large percentages of their workforce, often immediately after a title sells several million units. Every week sees a new story of a studio closing or downsizing, often taking beloved franchises down with it. 2018 alone saw Telltale Games, Boss Key Productions, and Capcom Vancouver shut their doors. That trend continued in 2019 with layoffs at Activision-Blizzard and Electronic Arts, among others.

The Pittsburgh-based game developer employs more than 120 people, producing a mix of educational entertainment titles like Happy Atoms, and core-focused VR games like I Expect You to Die. Since its inception in 2002, the company has grown to become the biggest game developer in the city and the largest educational entertainment developer in the United States. Despite that, it has never suffered a single layoff.

It seems impossible – with so many companies struggling to turn profits as they chase the next big hit – but the Schell Games approach doesn’t have a hidden trick or secret. Instead, it’s based on breeding creativity out of its team while understanding the crucial need for work-life balance and a diverse selection of games.

Ahead of the competition

If you’ve heard of Schell Games before, it’s likely for its VR hit I Expect You to Die, which plays like a series of 007-esque puzzle escape sequences. It capitalized on its strengths while avoiding the perils related to broken immersion and motion sickness common to other early VR games. Company founder Jesse Schell wasn’t new to the technology.

By never putting all of its eggs in one basket, Schell Games has avoided some of the valleys that inevitably follow the peaks in the game industry.

Schell was offered a job in Disney’s virtual reality studio in 1995. This time saw him developing attractions in the now-closed DisneyQuest interactive theme park, and he also designed the popular MMO Toontown Online. Deciding to move back east, Schell found an opportunity to teach at Carnegie Mellon Entertainment Technology Center. The passion for creating games was still there for Schell, however, who founded Schell Games initially as a consultancy to assist other companies before heading into development on its own.

Only a handful of  people formed the development-minded version of Schell Games, most of whom are still at the company today. In its early years, Schell Games worked on 3D games designed for web browsers, but as it grew and continued to evolve, the studio created a much more diverse catalog of titles. These included educational products marketed toward schools such as HoloLAB Champions, as well as assisting with the AR-enabled Star Wars: Jedi Challenges.

By never putting all of its eggs in one basket, Schell Games has avoided some of the valleys that inevitably follow the peaks in the game industry. As it has expanded into more mainstream game development in recent years, it hasn’t stopped development of education-minded titles. Between six and 12 games are typically in development at any one time, often with a team of about 10 people working on them. Without all hands focusing on the same games, Schell can experiment and create titles for newer platforms while avoiding direct competition with larger developers and publishers.

“As an independent studio, if you go on old platforms like consoles or mobile, now you have to compete with all these big guys out there with their giant marketing budgets and established IP,” Schell continued. “It’s really tough, but if you’re going to do something new that other people are staying away from, you can make that work. Now you’re in a great place because you’ve really established yourself.”

By launching on multiple VR platforms for a relatively low $25 price, I Expect You to Die has been able to generate more than $3 million in revenue thus far. The game will also be coming to the new Oculus Quest headset.

Despite the number of major technology companies with offices in Pittsburgh – Google and Apple among them – Schell Games dwarfs other game studios in the region. It’s odd, in a way, because Carnegie Mellon’s Entertainment Technology Center was the training ground for some of the industry’s most talented creators. The Last of Us and Uncharted 4 director Neil Druckmann is among the most notable. He received a Master’s degree in 2005.

“It takes making sure people feel valued in terms of obvious things like compensation but also in terms of their contribution to the studio at large.”

Among those that do stay in the city, however, many choose to call Schell Games their home. At one point, as much as 60 percent of the team was made up of ETC graduates, though the number now hovers around 30 percent. Many developers have remained at Schell Games for years, and the studio credits its retition partly to offering some creative freedom. Once a year, the entire office shifts to “Jam Week,” giving developers the chance to flex their creative muscles on any project they want. These have led to finished titles for the studio, including Orion Trail.

Schell Games’ also attributes low turnover to its environment of trust. The company’s executives, including Schell himself and VP of HR Chris Arnold, are keenly aware of the industry’s volatility and the troubles facing AAA studios.

“Whatever you choose to do or whatever your passion is, you’re going to be doing a lot of it. That’s your trade,” Arnold told Digital Trends. “And so we have to figure out ways of making people feel energetic and engaged throughout the course of their career and that takes a lot of different things. It takes making sure people feel valued in terms of obvious things like compensation but also in terms of their contribution to the studio at large. Do they feel like they’re being heard?”

Crunch is not the point

Schell has taken steps to keep its developers’ schedules to standard 40-hour work weeks. When new hires take it upon themselves to work extremely long hours on a project, they’re told that this isn’t incentivized, and that Schell would rather they’d be comfortable with a pace they could extend over eight years rather than eight months.

That’s contrary to the startegy used by some of the biggest game companies in the world. Rockstar Games’ Dan Houser infamously bragged about working 100-hour weeks in the lead-up to Red Dead Redemption 2’s launch. The company culture at BioWare led to a situation where changes are constantly made to ongoing projects, resulting in long stretches of crunch to salvage the game before launch. Layoffs have become ever-frequent, leading to increased pressure to form unions in order to receive fairer working conditions or severance packages.

Chris Arnold believes that this push-back could be necessary to enact significant change across the industry. “What I hope the movement does right now is force publishers in AAA relationships to reexamine the work practices in place,” Arnold said. “Where you don’t have that trust that we talked about, you substitute process. That’s the history of labor. Because you don’t have trust, you bargain for checks and balances, and I understand that. It would be a radical departure if an old union or more established or legacy union structure were to go in place in this industry – it would certainly be disruptive from a business standpoint. But I understand why it exists.”

Schell’s success hasn’t put a roadblock in the way of sticking to its principles surrounding labor, but has been possible as a result of them. Using 40-hour weeks and choosing “person over project” means less turnover, and developers can feel like their work is appropriately valued.

“We will always do that as long as this is Schell Games,” Arnold emphasized.

Schell Games remains open and willing to usher in the next wave of game designers. It regularly holds open house events for younger fans to learn about what goes into game design, a process that often leaves parents encouraged after learning that it’s a “real job.” With any luck, the company’s approach will be influential for others, and lead to healthy game industry for those children to join.

So, what’s next for Schell Games? Until You Fall, a sword combat game with magical elements, wants to eek the most out of what virtual reality can do. An unannounced title is also planned for the PC.

Master Predator: Hunting Grounds with These Tips and Tricks
May 24, 2020

Elon Musk is taking the Cybertruck for a spin on Jay Leno’s Garage
May 24, 2020

The best toaster ovens for 2020
May 24, 2020
DON’T MISS OUT!
Subscribe To Newsletter
Our iOS app will be ready soon, be the first to know
Give it a try, you can unsubscribe anytime.