Should cash-strapped Snapchat sell out? To Netflix? – TechCrunch 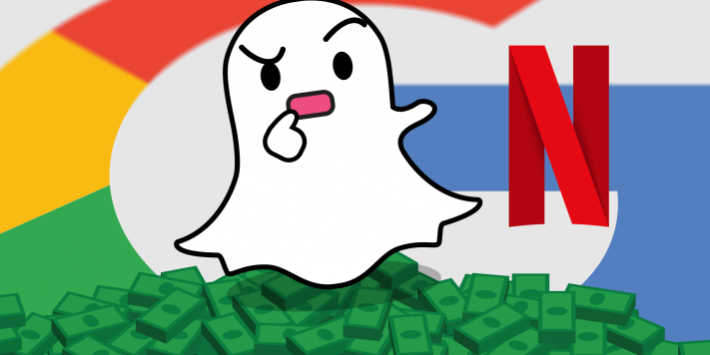 Snapchat needs a sugar daddy. Its cash reserves dwindling from giant quarterly losses. Poor morale from a battered share price and cost-cutting measures sap momentum. And intense competition from Facebook is preventing rapid growth. With just $1.4 billion in assets remaining at the end of a brutal Q3 2018 and analysts estimating it will lose $1.5 billion in 2019 alone, Snapchat could run out of money well before it’s projected to break even in 2020 or 2021.

So what are Snap’s options?

A long and lonely road

Snap’s big hope is to show a business turnaround story like Twitter, which saw its stock jump 14 percent this week despite losing monthly active users by deepening daily user engagement and producing profits. But without some change that massively increases daily time spent while reducing costs, it could take years for Snap to reach profitability. The company has already laid off 120 employees in March, or 7 percent of its workforce. And 40 percent of the remaining 3,000 employees plan to leave — up 11 percentage points from Q1 2018 according to internal survey data attained by Cheddar’s Alex Heath.

Snapchat is relying on the Project Mushroom engineering overhaul of its Android app to speed up performance, and thereby accelerate user growth and retention. Snap neglected the developing world’s Android market for years as it focused on iPhone-toting US teens. Given Snapchat is all about quick videos, slow load times made it nearly unusable, especially in markets with slower network connections and older phones.

As BTIG’s Rich Greenfield points out, CEO Evan Spiegel claims Snapchat is the fastest way to communicate, but it’s not for text messaging, and the default that chats disappear makes it unreliable of utilitarian chat. And if WhatsApp were to add an ephemeral messaging feature of its own, growth for Snapchat could get even tougher. Snap will have to hope it can hold on to its existing users and squeeze more cash out of them to keep reducing losses.

All those product missteps and and market neglect have metastasized into a serious growth problem for Snapchat. It lost another 2 million users this quarter, and expects to sink further in Q4. Even with the Android rebuild, Spiegel’s assurances for renewed user growth in 2019 seem spurious. That means it’s highly unlikely that Snapchat will achieve Speigel’s goal of hitting profitability in 2019. It needs either an investor or acquirer to come to its aid.

Snap could sell more equity to raise money. $500 million to $1 billion would probably give it the runway necessary to get into the black. But from where? With all the scrutiny on Saudi Arabia, Snap might avoid taking money from the kingdom. Saudi’s Prince Al-Waleed Talal already invested $250 million to buy 2.5 percent of Snap on the open market.

Snap’s best bet might be to take more money from Chinese internet giant Tencent. The massive corporation already spent around $2 billion to buy a 12 percent stake in Snap from the open market. The WeChat owner has plenty of synergies with Snapchat, especially since it runs a massive gaming business and Snap is planning to launch a third-party developer gaming platform.

Tencent could still be a potential acquirer for Snap, but given President Trump’s trade war with China, he might push regulators to block a sale. The state of American social networks like Twitter and Facebook that are under siege by foreign election interference, trolls, and hackers might make the US government understandably concerned about a Chinese giant owning one of the top teen apps.

Regardless of who would invest, they’d likely demand real voting rights — something Snap has denied investors through a governance structure. Spiegel and his co-founder Bobby Murphy both get 10 votes per share. That’s estimated to amount to 89 percent of the voting rights. Shares issued in the IPO came with zero voting rights.

But that surely wouldn’t sit well with any investor willing to pour hundreds of millions of dollars into the beleaguered company. Spiegel has taken responsibility for pushing the disastrous redesign early this year that coincided with a significant drop in its download rank. It also inspired a tweet from mega-celebrity Kylie Jenner bashing the app that shaved $1.3 billion off the company’s market cap.

Between the redesign flop, stagnant product innovation, and Spiegel laughing off Facebook’s competition only to be crushed by it, the CEO no longer has the sterling reputation that allowed him to secure total voting control for the co-founders. That means investors will want assurance that if they inject a ton of cash, they’ll have some recourse if Spiegel mismanages it. He may need to swallow his pride, issue voting shares, and commit to milestones he’s required to hit to retain his role as chief executive.

A Soft Landing Somewhere Else

Snap could alternatively surrender as an independent company and be acquired by a deep-pocketed tech giant. Without having to worry about finances or short-term goals, Snap could invest in improving its features and app performance for the long-term. Social networks are tough to kill entirely, so despite competition, Snap could become lucrative if aided through this rough spot.

Combine that with the $637 million bonus Spiegel got for taking Snap public, and he has little financial incentive or shareholder pressure compelling him to sell. Even if the company was bleeding out much worse than it is already, Spiegel could ride it into the ground.

Again, the biggest barrier to this path is Spiegel. Combine totalitarian voting control with the $637 million bonus Spiegel got for taking Snap public, and he has little financial incentive or shareholder pressure compelling him to sell. Even if the company was bleeding out much worse than it is already, Spiegel could ride it into the ground. The only way to get a deal done might be to make Spiegel perceive it as a win.

Selling to Disney could be spun as a such. It hasn’t really figured out mobile amidst distraction from super heroes and Star Wars. Its core tween audience are addicted to YouTube and Snap even if they shouldn’t be on them. They’re both LA companies. And Disney already ponied up $350 million to buy kids desktop social networking game Club Penguin. Becoming head of mobile or something like that for the most iconic entertainment company ever could a vaulted-enough position to entice Spiegel. I could see him being a Disney CEO candidate one day.

What about walking in the footsteps of Steve Jobs? Apple isn’t social. It failed so badly with efforts like its Ping music listeners network that it’s basically abdicated the whole market. iMessage and its cutesy Animoji are its only stakes. Meanwhile, it’s getting tougher and tougher to differentiate with mobile hardware. Each new iPhone seems closer to the last. Apple has resorted to questionable decisions like ditching the oft-missed headphone jack and reliable TouchID to keep the industrial design in flux.

Increasingly, Apple must rely on its iOS software to compete for customers with Android headsets. But you know who’s great at making interesting software? Snapchat. You know who has a great relationship with the next generation of phone owners? Snapchat. And do you know whose CEO could probably smile earnestly beside Tim Cook announcing a brighter future for social media unlocked by two privacy-focused companies joining forces? Snapchat. Plus, think of all the fun Snapple jokes?

There’s a chance to take revenge on Facebook if Snapchat wanted to team up with Mark Zuckerberg’s old arch nemesis Google . After Zuck declared “Carthage must be destroyed”, Google+ flopped and its messaging apps became a fragmented mess. Alphabet has since leaned away from social networking. Of course it still has the juggernaut that is YouTube — a perennial teen favorite alongside Snapchat and Instagram. And it’s got the perfect complement to Snap’s ephemerality in the form of Google Photos, the best-in-class permanent photo archiving tool. With the consume side of Google+ shutting down after accidentally exposing user data, Google still lacks a traditional social network where being a friend comes before being a fan.

What Google does have is a reputation for delivering the future. From Waymo’s self-driving cars to Calico’s plan to make you live forever, Google is an inventive place where big ideas come to fruition. Spiegel could frame Google as aligned with its philosophy of creating new ways to organize and consume information that adapt to human behavior. He surely wouldn’t mind being lumped in with Internet visionaries like Larry Page and Sergei Brin. Google’s Android expertise could reinvigorate Snap in emerging markets. And together they could take a stronger swing at Facebook.

But there are problems with all of these options. Buying Snap would be a massive bet for Disney, and Snap’s lingering bad rap as a sexting app might dissuade Mickey Mouse’s overlords. Apple rarely buys such late-stage public companies. CEO Tim Cook has been able to take the moral high ground because Apple makes its money from hardware rather than off of  personal info through ad targeting. If Apple owned Snap, it’d be in the data exploitation business just like everyone else.

And Google’s existing dominance in software might draw the attention of regulators. The prevailing sentiment is that it was a massive mistake to let Facebook acquire Instagram and WhatsApp, as it centralized power and created a social empire. With Google already owning YouTube, the government might see problems with it buying one of the other most popular teen apps.

That’s why I think Netflix could be a great acquirer for Snap. They’re both video entertainment companies at the vanguard of cultural relevance, yet have no overlap in products. Netflix already showed its appreciation for Snapchat’s innovation by adopting a Stories-like vertical video clip format for discovering and previewing what you could watch. The two could partner to promote Netflix Originals and subscriptions inside of Snapchat. Netflix could teach Snap how to win at exclusive content while gaining a place to distribute video that’s under 20 minutes long.

With a $130 billion market cap, Netflix could certainly afford it. Though since Netflix already has $6 billion in debt from financing Originals, it would have to either sell more debt or issue Netflix shares to Snapchat’s owners. But given Netflix’s high-flying performance, massive market share, and cultural primacy, the big question is whether Snap would drag it down.

So how much would it potentially cost? Snap’s market cap is hovering around $8.8 billion with a $6.28 share price. That’s around its all-time low and just over a quarter of its IPO pop share price high. Acquiring Snap would surely require paying a premium above the market cap. Remember, Google already reportedly offered to acquire Snap for $30 billion prior to its final funding round and IPO. But that was before Snap’s growth rate sunk and it started losing the Stories War to Facebook. A much smaller offer could look a lot prettier now.

Social networks are hard to kill. If Snap can cut costs, fix its product, improve revenue per users, and score some outside investment, it could survive and slowly climb. If Twitter is any indication, aging social networks can reflower into lucrative businesses given enough time and product care. But if Snapchat wants to play in the big leagues and continue having a major influence on the mobile future, it may have to snap out of the idea that it can win on its own.