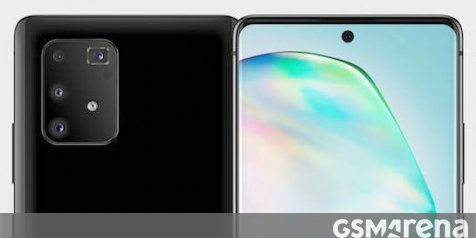 Weve been hearing about the Samsung Galaxy A91 since August. Samsung has already confirmed that it will come with 45W fast charging as on the Galaxy Note10+ and it will ship with Android 10 sometime in 2020. Its also expected to come with a Snapdragon 855 and a 4,500 mAh battery.

The latest leak shows what the phone may look like. These renders from 91Mobiles show a device somewhat like the Galaxy S11 renders we saw not too long ago, only not as curvy like the Galaxy S lineup. Around back is what looks like a four-camera setup (though 91Mobiles did note there were triple-cam versions of the renders) with a single LED flash. The Galaxy A91 may feature a periscope zoom camera

The front of the handset looks almost like a Galaxy Note10 with the centered hole-punch selfie camera at the top of the display  said to contain a 32MP selfie camera. As per these renders, there doesnt seem to be a dedicated Bixby button or a fingerprint sensor here. We expect the latter could be integrated into the display.

The Galaxy A91 is coming with a 6.7-inch Super AMOLED display at Full HD+ resolution. Its said to come with 8GB of RAM and 128GB of storage and powered by the Snapdragon 855. Theres at least one variant expected to arrive with 5G connectivity with Bluetooth 5.0 and Wi-Fi ac in tow.

In the imaging department is a 48MP main sensor with a 12MP ultra-wide (conflicting reports say its an 8MP ultra-wide) and a 5MP telephoto camera. This camera setup may feature something called Tilt OIS. Finally, the report suggests that the Galaxy A91 could launch as the Galaxy S10 Lite in some markets, perhaps with varying specification.

iQOO 5 appears on Geekbench as Pro version poses for the camera
August 14, 2020

vivo S1 Prime goes official with Snapdragon 665 SoC and 48MP quad camera
August 13, 2020
DON’T MISS OUT!
Subscribe To Newsletter
Our iOS app will be ready soon, be the first to know
Give it a try, you can unsubscribe anytime.