Redmi sends regards to OnePlus, but claims the Flagship killer title for the Redmi K20 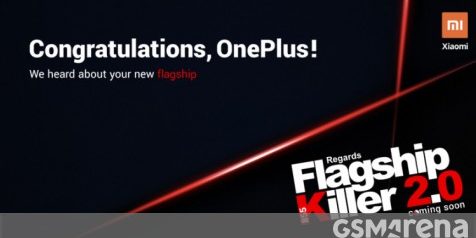 Redmis upcoming flagship got its name officially confirmed yesterday and now the company also revealed that it’s coming to India soon. The self-proclaimed Flagship Killer 2.0 will feature the Snapdragon 855 and a 48MP camera without breaking the bank. We also got to learn that the internal name of the device is the Demon King.

Xiaomis VP Manu Jain decided to congratulate OnePlus on the launch of their new OnePlus 7 Pro flagship and went further on to explain how the flagship killer mentality associated with OnePlus devices has all but disappeared, leaving Redmi to take its place.

They are choosing to Never Settle when it comes to pricing. At Xiaomi, weve believed in making innovation accessible to everyone by developing such Flagship Killers. As you will see again soon. – Manu Jain

Back in 2014, OnePlus was marketing its phones as flagship killers but since then the company has steadily increased their prices. With its latest OnePlus 7 Pro starting at $670, the company is now competing with the more established premium brands and Redmi is looking to fill the void with its own line of high specd devices with lower price tags.

Google applies for license to let it continue do business with Huawei
February 26, 2020
DON’T MISS OUT!
Subscribe To Newsletter
Our iOS app will be ready soon, be the first to know
Give it a try, you can unsubscribe anytime.