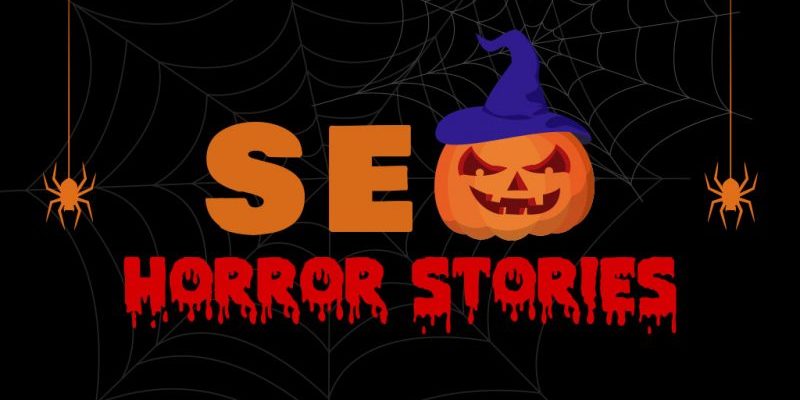 It’s that time of the year where people in costumes roam the streets, children can eat candy all they want, and creepy tales are told all over the world. But of course, it’s not just about ghosts and monsters. Us SEOs have our own “Halloween” moments that give us scares and nightmares.

I asked SEOs on Reddit to share their SEO horror stories and it was a ride reading all of them. While some are relatable, some are horrible, right out of an SEO’s darkest fears. Check out these stories from the folks at r/SEO.

A website redesign should not be as scary as it sounds, but in the wrong hands, it can lead to an absolute disaster. The SEO and website developer should always be aligned when a website is undergoing a redesign. You would never want a beautiful website with no visitors.

I had a client whose web developer noindexed the site when updating and developing new stuff. First time I experienced this the rankings were like the red wedding episode of Game of Thrones.”

Noindex is your best friend if you want to keep unimportant pages from the search results but putting noindex in the whole website? That is just a horrible misuse of it.

My old boss sold local SEO to 3 different skip hire companies all within spitting distance from each other. They were all from the traveler community so as not to be messed with by any means. We got all three businesses to the top of the SERP’s but 2nd and 3rd place used to call up complaining Long story short, one company (#3) found out, threatened us, told #2 and they both drove over 200 miles to our offices with baseball bats.

Lucky, that got resolved without any violence – the two companies stopped using us and I’m pretty sure the guy at #1 never found out.

I have met a lot of SEOs who take clients that are direct competitors with each other and 100% it turns into a disaster. Just don’t do it.

One of the sites I was a co-developer dozen years ago was in the top 20 domains hit by Panda/Farmer update and lost 90% of its visibility in one day. As I remember it was a loss over 100k unique users a day.

This one is a real classic. I remember when it was initially released back in 2011. Thousands of websites had the same experience as this losing a huge amount of traffic overnight. Definitely not a good memory.

AJAX allows web pages to be updated asynchronously by exchanging data with a web server. This means that it is possible to load parts of a web page without reloading the whole page. Despite Google engineers have significantly improved rendering of JavaScript for Googlebot, AJAX got its bad SEO reputation.

We analyzed log files to see where the crawl budget was spent. Logs showed that Googlebot sent 38 M requests during the month. 23,5M (!) requests were wasted on ajax content.

What recommendation we gave:

1. Check content that is provided on AJAX and evaluate whether it is worth being shown in SERP.

2. Close content that provides no value in robots.txt for Googlebot.

Before closing AJAX content in robots.txt, consider carefully what content is there. You can accidentally block the part of your webpage and the content can become meaningless for bots

This one is quite technical but it’s terrifying and it’s a story you can learn from. When you have a website with a million pages or thousands of pages, you would want to have that crawl budget spent on important pages.

Were hired by a client, we managed to rank him number one in the country for one of the most expensive services and two not so expensive. Somehow we had an insider information that they had around 2 sales per month for this expensive service and after our campaign, they had 4-6. So they definitely had the ROI after a couple of months, but they were not satisfied, so they fired us and hired another agency (They didn’t even know about Analytics, and they were looking me like I’m ghost when I told them that they must have had more calls for those 3 services. They couldn’t believe I knew…). So, the new company suggested redesign (probably because that was the only thing they knew how to do), Totally changed the content, all the page elements, without any redirection, etc. They lost all their rankings and traffic.

Still, for me, it was more a comedy than horror 🙂

This one is also a classic. An impatient client who switched to a different agency and totally messed up. Karma strikes fast in the SEO world.

They poach clients with unrealistic promises and never deliver.

I’ve won back a few clients from them over the years. In fact, I just got another back this month after being away for about 12 months. HE spent about $300/month and you know what he got for it? A placeholder page that says “future home of BUSINESS NAME” he’s almost broke now – hasn’t had a new client in months he told me.

BUT he’s willing to come back to me because he knows I can deliver. He was all over page 1 for dozens of searches – many in top 3. All that went away with YP

This is more of a redemption story, but SEOs look at businesses that pay a huge amount of money for directories with horror. Luckily for them, we SEOs are here to help.

I’m on google analytics, checking my website’s traffic. Even if it only has a few people visiting it, I’m really happy that my website has visitors. But there’s one weird thing I’ve noticed – 1 new user is added every week. I don’t know why. Maybe it’s because I allot time every week to go out and try to meet at least 1 person that’s willing to listen to me ramble on about my website.

This has been happening around a year now. Ever since I settled in my house, I always kept up my habit of going out every week. And historically speaking, the 1 additional user every week hasn’t stopped.

I found a way to check where the users are coming from. I won’t go into detail how I found out, but I’m gonna do it right now…

Most of my site’s traffic comes from the same place… It’s my house. But I shouldn’t be considered as a new user since I’ve always visited my site. Is someone breaking into my house every week just to check my website? That’s absurd.

That’s why I checked what my CCTVs recorded

The hallway camera is broken? It doesn’t matter. There’s only one room at the end of the hallway – my basement.

Here’s the thing, the basement is where I take the people I meet every week. Once they wake up as I cut into their bodies… I tell them the story of how I created my website from scratch. I can’t help it. I’m so proud of my website and I want more people to know. It doesn’t help that they scream every time I tell my story. Cutting off their tongues doesn’t seem to shut them up. But at least I got to tell them my story.

They were all so lovely. But they always died while I told them my story. They couldn’t be the visitors, right? That’s impossible. But if they are… I guess telling them my story worked.

This one is fictional but I love the creativity in the story, it was a roller coaster ride. Pageviews from the dead? No thanks.

Social media is one of the easiest ways for websites to get their name out there. For most new websites, it’s their main source of traffic. Getting your domain completely banned from the biggest social media platform in the world is just pure terror.

A client had an epiphany that it would be fun to delete all the landing pages of the site. When we asked their development team about it, they suddenly had selective amnesia.

Landing pages are critical for any SEO campaign. Having a disconnect between SEOs and web developers is already scary but deleting the landing pages from existence? What a nightmare.

All SEOs have their own stories on the horrifying experiences they’ve had whether it’s a broad core algorithm, bad links, and penalties. We all can relate to them. At the end of the day, these horror stories give us valuable lessons that can further improve our work as SEO professionals.

Do you have an interesting story to tell? Leave a comment below and share it with us!