Google Home Mini vs. Amazon Echo Dot | Which Is Better? 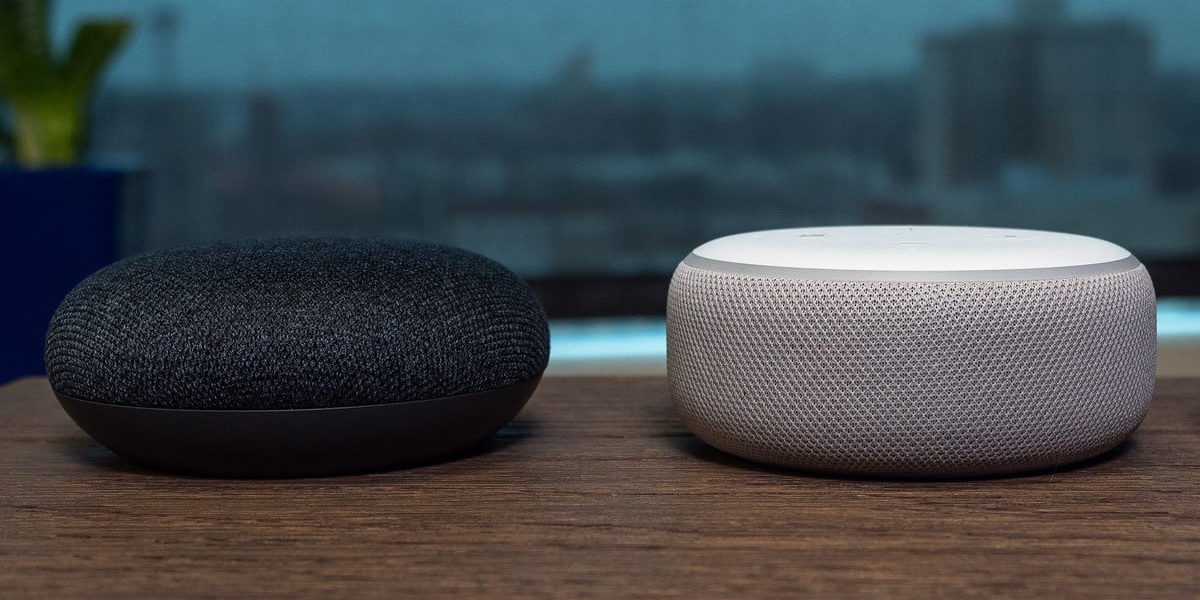 Google Home and Amazon are well-matched competitors with a slew of feature upgrades, device integrations, and new hardware. With good looks, great pricing and just about all of the features available from its big brother, the Google Home Mini is perfectly positioned both as an entry-level gateway to the Google Assistant and supporting accessory for homes already equipped with Google Home.

On the other side of the fence, Amazon and Alexa are old hands at cute and compact smart assistants. Now on its third generation, the Echo Dot has been wowing Alexa fans for years, and the last upgrade to the Dot was a big one. While both speakers originally retailed for around $50, both the Home Mini and the Dot have recently been marked down in price, which makes them even more enticing.

Google Home Mini versus Amazon Echo Dot — which is best? We put the two devices side by side and ran them through the gauntlet (OK, not literally) to find out which device is better.

While you could be forgiven for thinking that Google Home Mini and Amazon Echo Dot are similarly priced devices offering similar specifications, a dig into the spec sheets reveals some important differences. Yes, these are both entry-level, compact, smart assistant controllers, but there are nuances of which you should be aware.

The third-generation Echo Dot has a 1.6-inch speaker, and you can connect the Echo Dot to a larger speaker if you want. You can also improve the sound on your Google Home by connecting a more powerful speaker through the Google Home app. With an array of four far-field microphones, advanced Bluetooth audio support, and a 3.5mm audio jack, the Echo Dot is a low-cost Alexa controller. The third generation of the device has fewer microphones but greatly improved audio and sound quality over the previous Echo Dot model.

In contrast, the Google Home Mini only has two far-field microphones for voice detection, but it does have a 1.57-inch driver. There’s Bluetooth support, but the device lacks an audio port. Integrated Chromecast and Chromecast Audio streaming and enhanced audio format support demonstrate Google’s belief that Home Mini can serve as a competent, if compact, stand-alone speaker, alongside other duties. Still, it doesn’t hold a candle to the sound upgrade made to the newest Echo Dot.

When it comes to aesthetics, Amazon and Google have taken slightly different approaches. The Echo Dot very much resembles what you’d expect to happen if someone stomped on a regular Amazon Echo. The new and improved puck-shaped device now has an attractive fabric cover and is larger than the older Dot. It’s more rounded off, and its overall design is more attractive with color choices of Sandstone, Heather Gray and Charcoal. It also has a build quality that’s far more refined than you’d expect to see with a device at this price, and the compact size is unobtrusive in the home.

The new Dot retains the iconic blue and orange LED status ring seen on its predecessor. It adds a little interest, but also makes the Echo Dot more noticeable. It’s more rounded at the top and bottom and comes in charcoal, heather grey, or sandstone.

While the Google Home suffered more than a few barbs regarding its resemblance to a certain brand of air freshener, there was a clear attempt to visually differentiate the device from other tech in the home. Google offers a range of textured covers for the device that allow homeowners to better integrate the smart speaker with its surroundings.

That mission continues with Google Home Mini, available in chalk, charcoal, aqua, and coral. Again, build quality is excellent, and Home Mini’s pincushion form factor gives the device its own identity. Google’s designers have even spent time crafting Home Mini’s circular power adapter, which fits neatly in the hand and protrudes from the wall far less than the Echo Dot’s power supply. There are even clips on the power cable to tidy up any slack. These are small touches, yes, but they demonstrate a level of design detail and care that’s the hallmark of a great device.

Amazon’s Echo Dot has been around much longer than Google Home Mini, so that has given Amazon time to build out a relatively strong ecosystem. From calling features to whisper mode to Blueprints that let you make (and even publish) your own Alexa skills, Alexa seems to learn new stuff almost every day. Alexa’s reminders and routines are getting more advanced too, allowing users to set location-based reminders and create advanced routines without a hub (you can have Alexa turn off your lights, wait 15 minutes, and then turn off the TV for instance). You can also announce messages through all of your Echo Dots throughout your home.

Both devices can connect to and control a swathe of smart home stalwarts like the Nest Learning Thermostat (now part of Google Home), Philips Hue lighting, power outlets, smart locks and more. Google is working with partners to rapidly build out hardware integrations, but Amazon still has its nose in front. Alexa can control more than 60,000 smart home devices, compared to Google Assistant’s roughly 30,000.

Alongside hardware connectivity, both devices can also access “skills” or “actions” that deliver enhanced features like news reports, recipes, reservation bookings, jokes, quizzes, and more. Again, the Echo Dot leads here, with a plethora of different types of skills available for the device (some of which you may actually wish to use). Google’s offering is certainly smaller at this point but is expanding quickly, adding features like a multilingual mode, a translator mode, and step-by-step cooking instructions.

Before jumping in with Amazon Echo or Google Home, be sure to review the streaming entertainment services you currently use. As per usual, Amazon very much sees Echo as a gateway to service subscriptions and heavily promotes Amazon Music over other options. However, Amazon has begun to support more services on Alexa like Spotify Premium, Pandora, iHeartRadio, TuneIn Radio, and even Apple Music.

With Google Home Mini, there are fewer compatible music services sources, but you can use Spotify, Pandora, YouTube, Deezer, and Google Play music.

Overall, the Echo Dot proves to be a more welcoming partner than Google Home Mini.

One thing you should know before purchasing either smart speaker is that both Amazon Alexa and the Google Assistant are in active development with perpetual changes. This means both devices are regularly enhanced with new features, but you may also find that commands that worked previously no longer work or might require a slightly nuanced voice instruction. Or, they might seemingly work for everyone else except for you. It can be a real frustration with both Amazon and Google services.

That said, both devices work well at picking up voice commands as long as you enunciate, even when you’re blaring out tunes at full volume. The Echo Dot’s design, with an overt LED status ring and physical buttons for volume, mic muting, and triggering Alexa on the top of the device, gives Amazon a slight edge in terms of usability. Google Home Mini supports microphone muting via a rear switch and subtle, touch-sensitive volume controls on either side of the device, all of which work well.

The third-generation Echo has a larger driver and the sound is much better than ever before. Its 360-degree sound and a large driver in the Home Mini make it a “smart speaker for any room” (according to Google). But how do they stack up?

Google Home Mini delivers louder audio with punchy bass. At full volume, the speaker manages to keep distortion in check, but there’s a lot of treble, and it’s quite harsh. There’s little-to-no separation, and the overall effect is muddy. You can use the equalizer to adjust the treble and bass; and sure, it’s a step up from your phone’s speakers (and the second-generation Echo Dot, for that matter), but $50 (or $30 on sale) won’t buy you a match for a decent, dedicated Bluetooth speaker.

If this was between the second-generation Echo and the Mini, it would be no contest. The Home Mini wipes the floor with the Echo Dot 2nd gen in terms of sound. Since Amazon upped the sound game on the third-generation Dot, the Dot has the 3.5mm jack, and the Dot 3rd gen is louder and boasts a much richer, fuller sound, it edges out the Home Mini.

Which should you buy?

It’s clear that Google’s engineers and designers have spent time understanding and then building on the Echo Dot’s foundations. It looks better, and while it lacks the Echo Dot’s wealth of integrations, Google is catching up quickly.

If you are a die-hard Amazon customer, you’ll want an Echo Dot so it agrees with your existing devices (like Fire TV). However, if you don’t have Amazon or Google products, the decision becomes more difficult. If you do find yourself staring at the Amazon Echo Dot and Google Home Mini, wondering which one to take home, it’s Amazon’s Echo Dot that should win the day.

Apex Legends brings back original Kings Canyon map for limited time
February 23, 2020
DON’T MISS OUT!
Subscribe To Newsletter
Our iOS app will be ready soon, be the first to know
Give it a try, you can unsubscribe anytime.