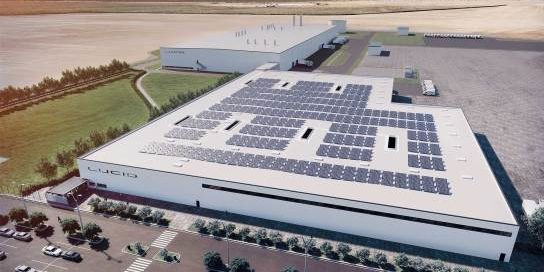 Lucid Motors today is breaking ground on its manufacturing facility. Located in Casa Grande, Arizona, the factory will be used to build the Lucid Motor Lucid Air electric sedan. According to the company, production will begin in late 2020.

This groundbreaking is the latest step taken by Lucid Motor towards getting the Lucid Air on the streets. Earlier this year, the company hired Peter Hochholdinger to head up its manufacturing operations. Hochholdinger came to Lucid Motors after a two-year stint at Tesla, where he oversaw its Fremont, CA factory as well as other sites around the world. Before Tesla, he was a senior director of production at Audi.

Last September, Lucid Motors secured $1 billion from Saudi Arabia’s sovereign wealth fund, which the company said at the time would be used to finance the commercial launch of the Lucid Air. Lucid Motors it will invest over $700 million into the Casa Grande factory by the mid-2020s.

“The Lucid Air is a cutting-edge electric vehicle designed, engineered, and destined for manufacture entirely in America,” said Peter Rawlinson, CEO, and CTO, Lucid Motors. “We are proud to be moving forward on our commitment to manufacturing the Lucid Air in Casa Grande. With supportive investors, an outstanding team of designers and engineers, and a product strategy that extends well beyond the Air, we expect today to be just the start of a longstanding presence in this dynamic city.”

Lucid Motor’s Casa Grande facility is said to result in approximately 4,800 direct and indirect jobs by 2029. It’s also estimated to produce $32 billion revenue impact for the city and county over 20 years.

Arizona Governor Doug Ducey said in a rebased statement that attracting a high-tech automotive company such as Lucid Motors is a testament to Arizon’s talent, business environment, and geographical location.

Lucid Motors says it picked this location after a search that included 13 US states and 60 sites. It says that it chose the area based on business climate, infrastructure, talent, location, and the Arizona-Sonora region’s automotive supply chain.

Lucid Motors was founded ten years ago with a different name and mission. Then called Atieva, the company focused on electric car battery technology until 2016 when it changed its name as it shifted to producing electric vehicles.