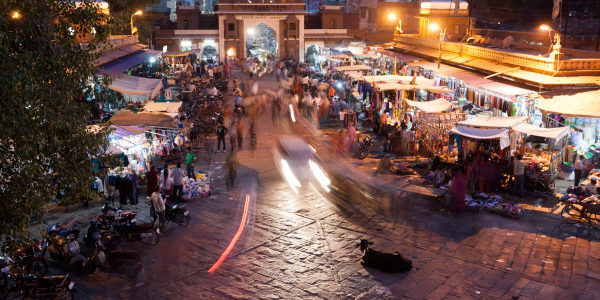 Walmart’s Flipkart has backed Shadowfax in a new $60 million financing round as the retail giant works to strengthen its logistics network in the nation.

The new round valued Shadowfax at about $250 million, two people familiar with the matter told TechCrunch. Flipkart alone contributed about $30 million to the round, they said. The startup declined to comment on the valuation and individual contribution of its investors.

Shadowfax operates an unusually built business-to-business logistics network in over 300 cities in India. The startup works with neighbourhood stores to use their real estate to store inventory, and a large network of freelancers who do the delivery. “Anyone with a bicycle or a bike can join our platform and deliver items for us,” said Shadowfax’s Bansal. The startup has also setup its own warehouses and fulfilment hubs.

“So we have not built any assets on the ground. We are essentially bringing the inefficiency of the market on to the platform and catering large enterprises,” he said.

This logistics network can handle goods in a range of categories including hot food, grocery and e-commerce. “It’s a very reliable logistics network. And each grocery store is only serving to users in a kilometre radius, so the delivery could be incredibly quick. These grocery stores, whose staff also often participate in delivery, only have to work with us for a few hours in a day, so it’s a quick way for them to make extra money,” he said. The platform has amassed more than 100,000 delivery partners.

Flipkart, which is one of Shadowfax’s “hundreds” of clients, said it will explore ways to work closely with Shadowfax going forward. Flipkart chief executive Kalyan Krishnamurthy said Shadowfax will help the company “significantly reduce delivery time and provide superior customer experiences across product categories. By leveraging kirana stores and the deep delivery capabilities of Shadowfax and other Flipkart-led innovations, we are building a strong foundation to make inroads into a dynamic hyperlocal consumer market.”

Fliopkart owns stakes in a range of logistics firms including WS Retail.