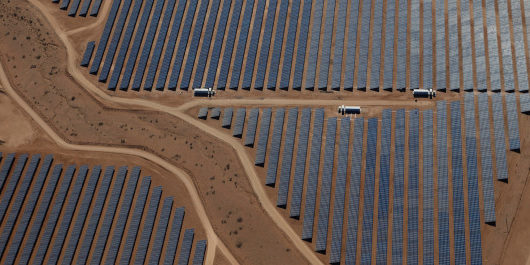 Google today announced its largest package of renewable energy deals yet. Worth a total of 1,600-megawatts, the package includes 18 deals in the U.S., Chile and Europe. This brings Google’s current set of wind and solar agreements to about 5,500 megawatts (MW) and the company’s number of total renewables projects it’s involved in to 52. Google argues that these new projects it announced today will drive about $2 billion in investments in new energy infrastructure.

In the U.S., Google says it’ll purchase a total of 720 MW from solar farms in North Carolina, South Carolina and Texas. In Chile, it’s buying an additional 125 MW to power its data center there. For reasons only known to Google PR, the company will only announce details of its plans for Europe tomorrow, at an event in Finland, where Google CEO Sundar Pichai will be present.

In today’s announcement, Pichai notes that many of Google’s earlier investments were in wind energy. Its new investments in the U.S. are mostly in solar, though. The reason for that, he notes, is the declining cost of solar. In Chile, the company is investing in a hybrid solar and wind deal for the first time. “Because the wind often blows at different times than the sun shines, pairing them will allow us to match our Chilean data center with carbon-free electricity for a larger portion of each day,” Pichai writes.